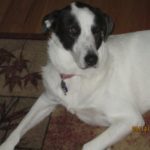 Holly was adopted twice through Magnificent Mutts. She was initially adopted as a puppy. Diane at Critter Central had been taking care of Holly for her first owner, who had become too ill to care for the puppy. When Diane learned that the first owner’s family wanted to relinquish Holly to an animal shelter, Diane contacted Magnificent Mutts for help. Holly was a big, loud, hairy dog. Luckily for us, Magnificent Mutts listed Holly. We always had big, loud, hairy dogs so we immediately fell in love with Holly. We adopted Holly almost two years ago. She has been an adorable pet who is blindly devoted to our daughters — and their friends. She has a big, loud personality, which is perfect for us. Finding Holly proves that there really is a dog for everyone.