Poor Darla was found on the side of the road somewhere in Indiana. A concerned passer by saw Darla and took her to the nearest Animal Control Facility. The facility had no room and no way to treat Darla’s injuries. A desperate call was sent out to area rescue’s to save Darla’s life.

Magnificent Mutts answered and brought Darla to the Chicagoland area to treat her injuries. During treatment, it was discovered that Darla’s injuries were the result of gun shot wounds inflicted at point blank range. Since her wounds were inflicted by a human, you would think she would be fearful and agreesive towards people, but through it all she remained gentle and trusting of those dedicated to saving her life.

The story doesn’t end there either. After enduring 5 hours of surgery, an amputated leg, and treatment for heartworm, it was discovered Darla was pregnant! A few months later after all she had endured, she gave birth to Hope, Awe, and Wonder. All three puppies are doing great! Darla is truly an underdog not to be underestimated! 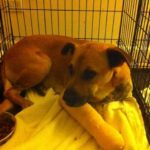