Patrick has the face of a fighter… NOT the face of a fighting dog, but of a sweet puppy with a strong fighting spirit, who is making his way from a life of despair and sickness to a life of hope and happiness. And this 5 month old boy is determined to complete his journey, with his friends from Magnificent Mutts.

Patrick was in an awful way when a friend of Magnificent Mutts rescued him. Patrick was besieged by demodectic mange over his entire body. The itching was excruciating, and the multiple wounds from his constant scratching had become painfully infected. Not to mention the hair loss that impaired his ability to regulate his body temperature, and the awful smell from his infections. Patrick was so sick, and in so much pain, that his owners were basically ignoring him, and “just waiting for him to die”.

Luckily for Patrick, a friend of his owner took compassion on the pup, and helped get Patrick to Magnificent Mutts. A friend, Suzanne, was recruited as an emergency foster caregiver. Patrick was brought directly to Elmhurst Animal Care Center to begin treatment. And so, young Patrick’s road to recovery was launched.

When Patrick arrived into rescue, he was shivering with pain and discomfort, yet he gamely yielded to all of his caregivers. Through multiple courses of medications and therapeutic baths, Patrick retained his friendly and optimistic demeanor. He also won the hearts of his vet treatment team, along with the Mag Mutts volunteers who visited him.

Patrick has now moved to his foster home, where foster “Mom” Suzanne is attending to all of his needs. Suzanne keeps Patrick on his medication regimen, bathes him as prescribed, takes him for follow-up vet visits, and makes sure he gets exercise and playtime that is so important to a growing- and now energetic- pup like Patrick. Patrick’s infections are now under control, his skin is improving, and he is even starting to grow out a little more peach-fuzzy hair in patches of white and brown brindle. And he has become such a happy guy now that he’s feeling better!

Patrick’s recovery is ongoing, and he shows more and more promise every day. His next stop will be a foster home with a fenced yard for safe romping, and an experienced human “parent” who can help him with his puppy manners and help him grow into the best, and healthiest, puppy he can be for his eventual Forever Family.

Magnificent Mutts asks that you please share Patrick’s story, in the hope of recruiting his next foster (or Forever!) family. Donations toward Patrick’s veterinary expenses may be made at www.magnificentmutts.org, or at Elmhurst Animal Care Center. 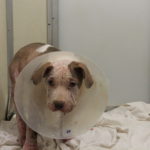 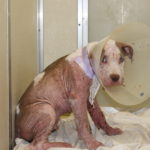 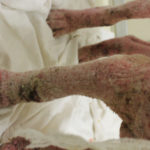